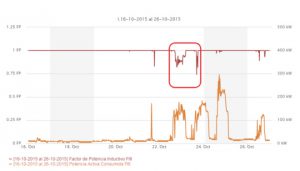 DESCRIPTION:
At the start of the campaign, it was not realised that the condenser bank was disconnected.
Thanks to the alarms raised, the problem was detected, the client informed, and the situation corrected, in less than 2 days.
Had SMAC not been available, there would have been a surcharge on the bill for consumption of reactive power for at least 2 months, with an estimated cost of €1,600. 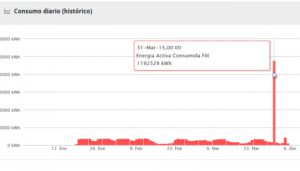 DESCRIPTION:
Following receipt of an alarm notifying excessive power demand, it was possible to determine that the metering equipment was defective. This situation was notified both to the client and the utility company, and we forestalled the issuance of an incorrect bill.
SMAC has allowed the evolution of consumption to be tracked and new metering incidents to be detected, and drew attention to the situation until the defective metering equipment had been replaced. 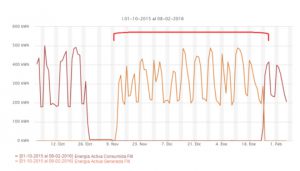 DESCRIPTION:
After detecting a fault suffered by metering equipment, it was possible to track the repair of this by the distributor company. Once the action had been completed, it could be seen that the situation had not been resolved. The equipment had been wrongly connected and was metering the consumption as though it were a facility for generation instead of consumption.
Thanks to this control held over the situation, it could be highlighted and tracked until the distributor had carried out the repair properly.

DETECTION, ANALYSIS AND REDUCTION OF CONSUMPTION OUTSIDE OPERATIONAL HOURS. 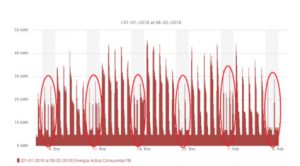 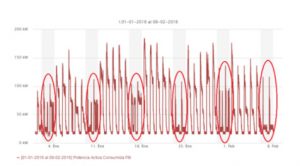 DESCRIPTION:
The incorporation of the tool allowed the high consumption taking place at the facility at weekends, at times when the building was practically empty, to be seen.
This was due to the facility’s demand for centralised HVAC, which came into operation to meet the needs of a very small zone.
Using the tool has allowed the situation to be known, assessing the financial cost it entailed (about €2,500 per year), and evaluation of the possibility of installing an independent HVAC unit for the area which is occupied at weekends. The modification of the HVAC system will be performed, as the investment will be amortized within a period of less than 1 year. 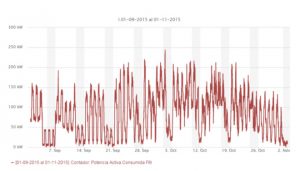 DESCRIPTION:
The facility referred to has a limited power capacity.
Implanting the monitoring system has allowed the operation of the highest-consuming equipment to be fitted to the capacity of the power transformer, avoiding the need to increase this and possible faults due to overloads.